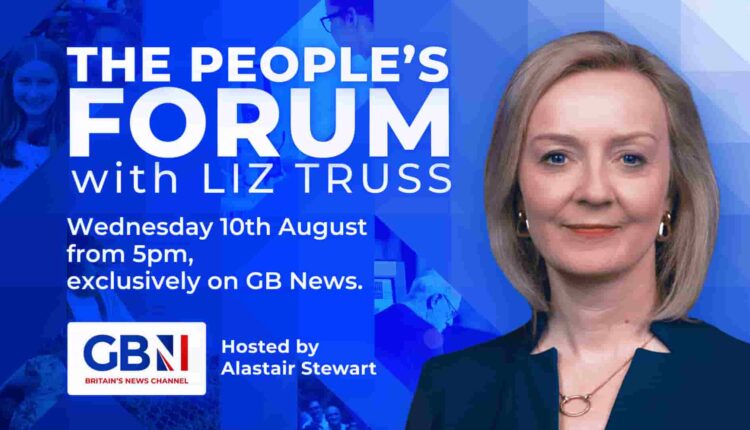 GB News presenter Alastair Stewart says Manchester is the “perfect place” for Liz Truss to be quizzed over what Great Britain would look like if she becomes Prime Minister.

Alastair will be in Leigh, Greater Manchester, to host a special hour-long live programme at 5pm next Wednesday with the Secretary of State for Foreign, Commonwealth and Development Affairs.

The People’s Forum with Liz Truss will be broadcast live on television, online, and on GB News Radio, which attracts more than 270,000 weekly listeners.

But locals are being given the opportunity to get a front row seat by applying to be a part of the audience to witness what could be a pivotal moment in the race between Ms Truss and Rishi Sunak to Number 10. Applications for tickets can be made here.

Commenting on the event, which will be at a venue to be announced next week, veteran GB News presenter Alastair said: “I am delighted we are conducting this People’s Forum in Leigh. This is something of a homecoming for me because I also fronted the first ever leaders’ debate at Granada TV’s Manchester studios in 2010”

He added: “Questions will come from viewers and listeners across the country. But the people of Leigh, and the north west generally, are at the heart of the Red Wall and take a refreshing, no-nonsense approach to politics. They can be depended on to call it as they see it, without fear or favour, so there’s no better place to be hosting this event. It will be the perfect setting for Ms Truss to be quizzed on her vision for Britain.”

Explaining why she had accepted an invite from GB News to appear in the People’s Forum, Ms Truss said: “I am looking forward to talking to GB News viewers and our members in the heart of our Red Wall and taking their questions. As Prime Minister, I will work tirelessly to deliver for those who voted for us across the Red Wall, including those who put their trust in us for the first time in 2019. I have a bold and ambitious economic plan and the experience in Government to deliver it. I am on the side of people who work hard and do the right thing and as Prime Minister I will make sure we are an ‘aspiration nation’ with a fast- growing economy and ensure every part of the country thrives.”

In line with GB News’’ mission to embrace all views, audience members will represent a cross-section of political opinion and will ask questions that cover a breadth of topics, including Brexit, migration, tax, law and order, and much more

In a letter sent to Mr Sunak and Ms Truss, setting out the format of the People’s Forum, GB News Editorial Director Mick Booker, said: “The idea of these Forums is to draw out the thinking of each candidate on the issues closest to our viewers and listeners’ hearts.

“At GB News we do this in a warm conversational way – it is not our style to go in search of ‘gotcha’ moments or high-octane arguments between the candidates. We really listen. Viewers  and listeners consistently tell us how much they enjoy the fact we are disrupting the cosy club of pre-existing news broadcast channels and programmes, many of which filter out opinions simply because they clash with fashionable metropolitan mindsets.”

The channel has also invited Rishi Sunak, Ms Truss’ rival for the Conservative leadership, to take part in an exclusive People’s Forum event which would air on a separate night.

To apply for tickets visit: https://www.gbnews.uk/the-peoples-forum-with-liz-truss